The "Prohibition Pen" has long enjoyed near-legendary status among pen collectors. Not a pen at all, but a hard rubber pocket flask in the form of a giant Waterman 20 safety pen, the Prohibition Pen has also been a bit of a mystery, for it appears in no Waterman catalog, nor is it mentioned in any Waterman literature of the era. Yet the materials, components, and construction leave no doubt that these "pens" are a genuine Waterman product. Rare as they are, the number of known examples indicates an original production run too large for an individual workman's unofficial lunch-hour project.

Several years ago I suggested that the Prohibition Pen might have been made as a novelty gift for Waterman president Frank D. Waterman to hand out to his friends and fellow businessmen, along with such similarly rare and undocumented items as the 35th anniversary commemorative pen, the handbell, and the cigar cutter, the last two both clearly marked as Rotary-related (the good luck tokens/poker chips also likely originated in this milieu). Frank D. Waterman was a tireless joiner of professional organizations, to which he put considerable energy and enthusiasm, and the distribution of such promotional gift items would fit the time, the circumstances, and the man. 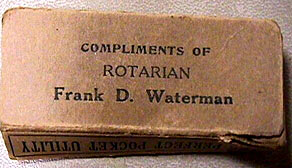 By a stroke of luck, I recently ran across a reference that confirms this hypothesis. It appears on p. 227 of the March 15, 1921 issue of the Bookseller and Stationer (vol. 54), and describes the banquet held on February 28, 1921, as part of the Wholesale Stationers' Sixth Annual Convention at New York City's Hotel McAlpin. At first the passage seemed rather cryptic, but upon reflection it became clear that the jocular account could refer to one thing only:

"Much curiosity was shown as to the entertainment for Monday evening which members were asked to reserve for a 'surprise' and well worth the suspense was the entertainment. Ninety-five members with their wives were entertained at a dinner dance, after which they attended the Ziegfeld Follies on the Amsterdam Roof (naughty naughty). The souvenirs, supplied by their hosts of the New York Commitee [sic], included ivory vases for the women, and pocket knives of improved design for the men, while Frank F. [sic] Waterman gave to each one a fountain pen, those given to the men being filled with an unadvertised ink peculiarly strong." 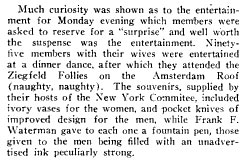 Sixteen months into Prohibition, there can be little doubt what that "unadvertised ink peculiarly strong" would have been, and one can be equally certain that it was not distributed in any ordinary pen. While the account makes clear that 95 examples were distributed that night in 1921, we must also consider the likelihood that at least a few more were made, probably for individual distribution. How many survive today is an open question, but one thing is certain: even pristine examples cannot now be claimed to have never been filled!

NOTE: Another, less detailed account is found in The American Stationer, vol. 88 no. 9 (Mar 5, 1921), p. 8:
"Monday Evening's Entertainment: On Monday evening the members of the Association and their wives were entertained by the Joseph Dixon Crucible Co. at a dinner given on the New Amsterdam Roof. The ninety-five guests who attended this enjoyable affair were afterwards taken to the 9 o'clock performance of Ziegfeld's Follies."