The Onoto was the original plunger-filler, which proved so successful that the same basic mechanism remained in production for a full 50 years. Introduced in 1905, the Onoto was not De La Rue's first entry into the pen market, but it was the model that made the company the British market leader. Marketed as "the Pen", Onoto quickly earned a worldwide reputation for excellence in both design and construction.

Onotos fill on the downstroke; the plunger piston creates a vacuum behind itself as it travels down the barrel, which at the bottom of the stroke is released, sucking in the ink. In most Onotos, this mechanism also incorporates a shutoff valve: when the plunger knob is screwed down, the end of the plunger piston closes off the ink reservoir. In order to write, the knob must be unscrewed part of a turn.

Onotos came in a vast range of materials, models, and sizes. Though they were sold in large numbers worldwide, they are not commonly found in the United States. A serious and well-financed attempt to introduce the Onoto to the US market was made starting in 1909, but apparently the pens, which were partially American-made, proved to be substandard. The operation was shut down around 1913, with the company buying back unsold pens from dealers and distributors. Onoto re-entered the US market in 1920, but only with stylographic pens. Some Onotos for the British market were made in the USA during the First World War, and there is reason to think that many early metal overlays were American-made as well. While the Onoto left little trace in the United States, it was very influential in Japan. The Onoto became the template for many early Japanese fountain pens, though the Japanese usually opted to omit the self-filling feature, while retaining the shaft-mounted ink shutoff valve.

Up until the late 1920s, all Onotos were made of hard rubber -- mostly black, but also mottled red & black ("Antique"), red, and even blue and green. Around 1928, De La Rue began production of Onotos in celluloid. Many different colors and patterns were offered, including transparent web and mesh. From 1924, Onotos were also offered as lever-fillers, as were other De La Rue pens that did not bear the Onoto name. 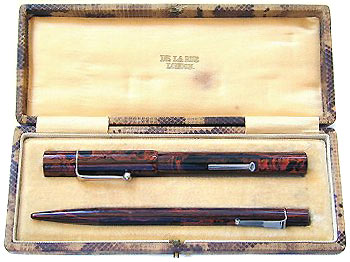 Although many collectors now look askance at plunger-fillers, that is largely due to their experience with pens made by Sheaffer and Wahl-Eversharp, whose packing seals are difficult to renew successfully. But while those makers made servicing hard (requiring drilling out of old sealing units, for example), De La Rue made it easy. All filler components are assembled with screw joints (left-hand thread, though!) and crosspins, and by using a special Onoto tool, the cork seals of the packing unit can be replaced without even removing the plunger knob.