The Duofold was a design that changed everything. Its success swiftly transformed Parker from one company among many into the undisputed market leader. Its bold two-tone color scheme solidly put to rest the belief that the public preferred their pens plain and black, and set the stage for the widespread adoption of color celluloid pens a few short years later.

The Duofold was an offshoot of Parker's Jack Knife Safety line. The first Duofolds (introduced 1921) were large button-filling pens in red hard rubber with black hard rubber end pieces and bandless caps – showy items that caught the public's fancy in a big way. The original full-sized Senior Duofold (5.5 inches/13.8 cm long) was soon joined by a smaller Junior and a ringtop Lady Duofold. Colors were limited to red and black until 1926, when production shifted to celluloid (called "Permanite" by Parker). The first new color was a jade green, but the "Jade Pens" bore no Duofold marks until the latter part of 1927 – at which time two new colors, both highly desirable today, were introduced: Lapis Lazuli blue and Mandarin Yellow. In 1928, Moderne black and pearl (black lined pearl) was introduced. At the end of 1929, the Duofold line was completely redesigned. The new pens were streamlined, with smooth, tapered ends. Additional colors were introduced: burgundy (red and black pearl); Moderne green and pearl (green lined pearl); and finally, green and black pearl (black lined green pearl).

A groundbreaking study on the Duofold appeared in a seven-part series by Don Zazove and Mike Fultz in The Pennant, volumes X/1 to XIII/3 (Spring 1996-Spring 1999). This material along with much more is now available in the 2006 Duofold monograph by David Shepherd and Dan Zazove. 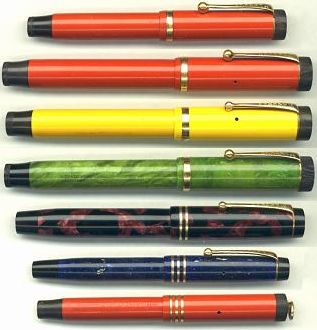 Duofolds display many cap band variations, by which they can be dated. In addition to the basic models noted above, there was also the Special (Senior length, Junior diameter), the Juniorette (similar to a Lady, but with a clip), and the Vest Pocket (a miniature model). Duofolds in colors other than red and black are particularly vulnerable to discoloration, since reactive sac deterioration byproducts tend to build up in the tightly-sealed barrel. Pens in lighter colors (green, black and pearl, green and pearl, green and black pearl) command a substantial premium if undiscolored. The highly transparent pale green first used is particularly delicate, though the later, brighter greens are also very difficult to find in their original state.

The Duofold's importance for Parker cannot be exaggerated. Not only was it a bestseller, it allowed Parker to reduce drastically the number of different models in its catalog, greatly increasing efficiency. Parker scored another hit with the Duofold's successor, the Vacumatic, and by 1934 the Duofold line was being displaced -- though production quietly continued throughout the decade. The name was revived in 1940 for various models resembling Vacs in design, but by then the era of the classic Duofolds was over.

Duofolds are sturdy, reliable pens that write smoothly and are easy to service. Most have nibs that are quite firm, especially the larger models, so pens with flexible, broad, or italic nibs are particularly sought after. These kinds of nibs are more commonly found in pens made in Canada, as well as US-made Duofolds exported to Denmark (these typically bear the anchor mark of the Danish agent). Many Duofolds are now found with "Arrow" nibs and comb feeds; most of these are later factory replacements, although some late-production Duofolds were so equipped originally. Nonetheless, collectors generally prefer their Duofolds with spearhead feeds and Duofold-imprinted nibs.

NOTE: there is much misinformation on the origins of the Duofold name. Some claim that it denotes that the pen could be converted into a desk pen, or used as an eyedropper, or that its nib could be used upside-down. Yet not one of these supposedly key features was so much as mentioned in early Duofold advertisements or company literature. In fact, the "Duo" prefix was very popular at the time, being used as a marketing superlative for a wide range of products (paralleled by the ubiquity of "super" in the postwar era). "Duofold" would have suggested that the new oversize Parker was twice the pen competitors could offer – consistent with its pricing, which pushed existing market norms -- while the "-fold" suffix both carried through the comparative reference (as in "twofold") and alluded to the mass and rigidity of the Duofold's large, manifold-style nib ("manifold" being the term for stiff nibs made for use with carbon paper, with which one could make manifold copies of a document).

Link to Duofolds for sale