After a year or so of test-marketing trials, the Vacumatic was formally launched in 1933, displacing the Duofold as Parker's premier line.  Vacs were initially released under the name "Golden Arrow", and then "Vacuum Filler" (more on Vacuum Fillers).  US production continued through 1948, and until 1953 in Canada.  Although other patterns were used, Vacumatics are strongly identified with the laminated celluloid which they pioneered.  Clear celluloid alternating with pearlescent allows the ink level in the barrel to be immediately visible.  Vacumatics are pump-fillers, with a large ink capacity (more on Vacumatic fillers, including filling instructions).

The best of the Vacumatics are the top-line models of the '30s, as illustrated above.  The filler units are all-metal, the nibs are two-tone, there is a "jewel" and tassie ring at the end of the barrel, and both jewels and the section are laminated (at the end of the decade, many pens came with nonremovable "bullseye" barrel jewels, which appear black in light that is less than bright).  These pens came in three basic sizes: standard, small, and oversize.  Canadian production also included a long standard, which is scarce.

The Junior line of the same period was simpler, with black jewels, blind caps, and sections and no two-toning of the nibs.  For that, Juniors were made in a wider range of patterns, including marbles, brickwork (Golden Web), longitudinal striations (Shadow Wave), and others.  Juniors came in two sizes, Junior and Juniorette, the larger slightly smaller than the standard top-line pen.

At the end of the decade, the Vacumatic line was simplified, and models reduced to four basic configurations: small (Debutante); standard; Maxima (oversize); and slender Maxima (standard thickness, Maxima length).  The first two sizes were also briefly offered with gold filled caps as Imperial Vacumatics, now quite scarce.  The name "Junior" was applied to standard-sized pens without the Blue Diamond guarantee and with slightly smaller nibs, which were otherwise equivalent to the Major (which, despite much confusion among collectors, was not an oversized model).  The term "Maxima" is applied only to pens made from 1937 on; earlier oversize pens with the lockdown filler are generally referred to as Oversize Vacumatics.

The main changes in the line were: name change from Vacuum Filler to Vacumatic, 1933; introduction of Speedline filler, 1937 (lockdown fillers not immediately discontinued); introduction of Blue Diamond clip, 1939; plastic plungers, elimination of barrel jewel, 1942 (some 1942 pens made with metal fillers).

The Vacumatic filler was also used for a reintroduction of the Duofold line at the end of the '30s; Vac-filling Duofolds have longitudinal stripes, and were produced in much more limited numbers than contemporary Vacumatics.  The Parker 51 was introduced with the Vacumatic filling system; for an illustration of the later plastic plunger filler, see the 51 Profile.

NOTE: Vac nomenclature is extremely confusing; to see a simplified version of Parker model names that most collectors either use or will immediately understand, click here. 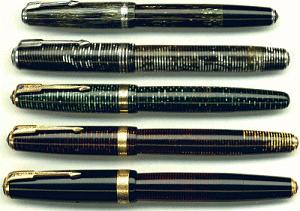