Fountain pens of the ‘teens and the ‘20s came in many designs, but all retained the same basic cylindrical shape with blunt ends. Sheaffer’s introduction of the radically streamlined Balance in December 1928 changed this overnight. The new pen's profile was covered by USA design patent 78,795 (filed November 21, 1928, issued June 18, 1929). Other pen companies rushed to streamline their products too, though most settled for a less drastic approach – Parker’s redesigned Duofold, with only slight tapering and flat ends, was typical.

The original Balance pens had a decidedly asymmetrical teardrop-like form, with a short section and a long tapering tail at the end of the barrel (see image above). Shortly afterwards, the barrel end was given a shorter and blunter termination that more closely matched the profile of the cap top; this also reduced overall length, even though a longer section was adopted at the same time.

The new line was extensively advertised (click here to see a 1931 ad), and sales were strong from the beginning.  The earliest models are the most difficult to find, especially undiscolored examples in colors such as jade green which are particularly prone to darkening.  The first few years also saw a range of interesting products that are now quite desirable, such as miniature vest pocket size pens and pencils, golf pencils, convertible desk/pocket pens, pens with telephone dialer ends, and boxed sets with matching pocketknives or other accessories. Advertisements from the mid-1930s on tended to emphasize the name "Balance" less, favoring instead model names such as "Lifetime" and "Feathertouch".  These model names (along with various model numbers) were carried over to the Balance’s successors, the metal-capped Crest of the late ’30s and the Triumph and its open-nibbed siblings of the 1940s, with their stubby, sausage-shaped profiles and their metal or metal-lined caps – causing some confusion about exactly when the Balance line was discontinued.

The pen at the far right is a red-veined grey pearl Balance from c. 1933. Note the humped clip with the round ball, which is not as long as the original clip of 1929-31 (see top image).

The pen in the center is an oversize Balance in marbled green and black, dating to c. 1935. It is an uncommon Autograph model, with solid 14K gold clip and cap band. This and the pen to its left carry the humped clip with the flattened ball, used from c. 1934 on.

The leftmost pen is a plunger-filler in marbled grey pearl and black, dating to c. 1935.

A more streamlined clip with only a vestigial flattened ball and no hump is found on Balance pens from c. 1936 on (see set below). 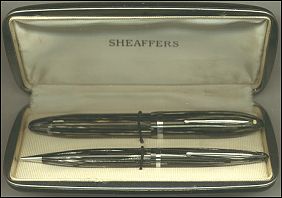 Balance pens were well made and survive in large numbers. They are good practical users, with nibs that are consistently smooth writers (Sheaffer metallurgy was an industry leader in the ‘30s). Flexibility is very much the exception, however, as are nibs broader than medium-fine. Reconditioning of lever-filling Balances is straightforward, but plunger-fillers require special measures. When buying a reconditioned plunger-filler, make certain that its packing unit has been properly replaced: a popular but decidedly inferior stopgap is to jam a stiff rubber washer inside the barrel. One weakness common to all Balances is a thin cap lip. To prevent formation of hairline cracks, many users avoid posting the cap on the barrel end when writing.

Clip variations are discussed above; clipless models with ringtop fitting were also offered, including larger sizes. Balances came in a range of sizes, with the largest generally being the scarcest and most desirable. Original colors offered included jade green, black and pearl, and black. Other marbled finishes were soon added, including red veined grey pearl; green pearl and black; grey pearl and black; blue, white and black (rare); and ebonized pearl (black with inlaid flakes of abalone shell). The most commonly-found Balances, however, are those with longitudinally striated pearlescent colors, including red, grey, green, brown, and pink ("Roseglow").