The Golden Anniversary issue of Waterman's Pen Prophet magazine, published in 1934, trumpeted the simplicity and efficiency of the Waterman lever-filler in comparison to more complex pump mechanisms. Yet by September the next year, the great success of Parker's new Vacumatic had pushed Waterman to strike back with a pump-filling, transparent-barreled pen of its own: the Ink-Vue.

The Ink-Vue mechanism was functionally similar to the Vacumatic, essentially a bulb-filler with a mechanically-squeezed bulb. Where the Vacumatic's bulb (called a "diaphragm") was extended and retracted by a plunger, the Ink-Vue's was repeatedly compressed laterally by means of a small lever. The earliest Ink-Vue levers were one-piece, as shown in the pen above, but a jointed, two-piece lever was adopted very shortly thereafter. Another early feature was the Waterman globe emblem on metal disks set into both cap top and barrel end; the barrel end disk was retained after the standard Ink-Vue was redesigned, but the cap disk was replaced with an Art Deco-inspired stepped top. Precisely when this took place has yet to be established; confusingly, the patent for the final Ink-Vue design with the jointed lever (2,087,672) was filed on April 6, 1935 -- before the July 26, 1935 application date for the patent covering the one-piece lever version (2,068,419). The one-piece lever is clearly visible in advertisements from December 1935, but is gone by June 1936.

The Ink-Vue's material was strongly Deco in design, with a bold zigzag pattern of pearlescent celluloid against a black (clear, for the barrel) background, dubbed "Silver-Ray" (grey) and "Emerald-Ray" (green). Waterman advertising wasn't consistent in hyphenating these names, so "Silver Ray" is equally correct.

Matching pencils were offered from the beginning, and transparent celluloid demonstrators were distributed to dealers. Although one would expect that the demonstrators would have been released at the very start of Ink-Vue production, all of the demonstrators we have seen postdate the switch to the jointed lever and the stepped cap top. The demonstrators featured prominently in both advertisements and the Pen Prophet during 1936.

The standard Ink-Vue was given the model number of 84. It carried a #5-size nib, and was equipped with Waterman's "Tip-Fill" feed that enabled the pen to be filled with the nib only partially immersed. An upscale version was released in 1936, carrying a #7-size nib. Called the DeLuxe Ink-Vue (also spelled "De Luxe"), it sported a fancy triple cap band with milled side bands, a clip with matching milling, and Art Deco-inspired stepped ends. New colors were added to the line, as well: Copper Ray, and Jet. 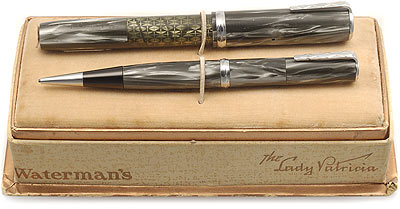 At the end of 1936, an Ink-Vue version of the Lady Patricia was introduced (US design patent 102,720). It used the same basic mechanism, scaled down, combined with an elaborately patterned transparent ink window (US design patent 105,022, utility patent 2,162,223). Judging from surviving numbers, it proved the most popular Ink-Vue model of all. Colors offered were Mist (grey pearl), Sunset (red pearl), and Black Lace. DeLuxe Ink-Vue desk pens were also offered, but are not common

In 1939, a new variant of the Ink-Vue system came out with the 5116. This pen used a one piece barrel-section assembly, with a screw-in plug at the end. A special flanged rubber bulb was cemented to a vented plug and then slid into place, snapping into a matching groove inside the barrel. The design was patented as 2,217,755. An example of a standard 5116 is shown above; a close-up detail of a very rare demonstrator version appears below. 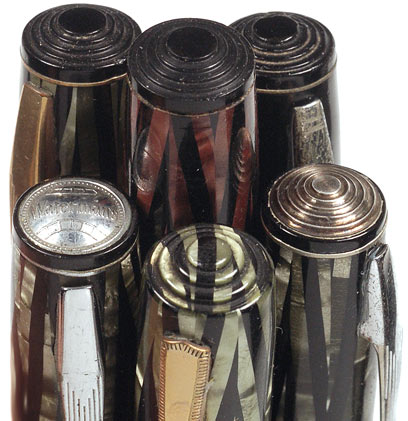 Standard Ink-Vue caps are shown in the back row above in Silver Ray, Copper Ray, and Jet. In the bottom row, from left to right: an early production Silver Ray cap with the inset metal globe emblem; an Emerald Ray DeLuxe; and a very unusual Silver Ray standard with a stepped crown in silver (probably a prototype).

The filling instruction above are for the first version Ink-Vue, with the unjointed lever. The repair instructions below are noteworthy on several counts, one of the most significant being the illustration of the rubber washer. When old Ink-Vue pens are disassembled, this washer is usually found hardened and stuck firmly to the bottom of the filler recess. Most repairmen have never even noticed it, thinking it part of the recess itself, and have relied upon sealants of various sorts to make the sac assembly airtight -- even though these instructions explicitly state that cement is not necessary.