At the beginning of 1949 Sheaffer introduced a pneumatic filling system for their top-line pens, in which the ink sac was emptied by air pressure generated by depressing a plunger. The pressure was automatically released once the plunger was fully depressed, allowing the sac to fill. "Touchdown" was the name given these simple, efficient, and elegantly engineered pens.

The first Touchdowns were thick pens with correspondingly large two-tone nibs, exemplified by the 1949 Sentinel above. In the spring of 1950, however, the line was slenderized and the redesigned pens were termed "TM", for "Thin Model" While successful, this line was itself in production for only a few years before being displaced by the Snorkel -- although economy Touchdown models without the Snorkel mechanism remained in the lineup for much longer.

In 1952 Sheaffer released the Snorkel, arguably the most mechanically complex fountain pen ever mass-produced (a Signature model with gold solid gold cap band is shown above). The Snorkel was a slightly lengthened Touchdown equipped with a retractable filling tube running axially through the feed, which enabled the pen to be filled without ever dipping the nib in ink.

The Snorkel remained in production throughout the '50s and in some cases into the early '60s; surviving examples are plentiful. Repair is straightforward but somewhat burdensome, due to the complexity of the mechanism.

The central component of the Snorkel mechanism is the sac housing assembly. An early production example appears at top; the version below it is far more common (click on the picture to enlarge). The sac itself is conventional, but is attached to a stiff rubber plug into which the Snorkel filling tube is inserted. The plug is crimped into place, making sac replacement a bit of a chore -- especially when the old sac must be scraped off the inside of its metal housing.

Note that many sellers offer "working" Snorkels that have not had their original sacs or seals replaced.  A leaky point seal may go unnoticed for some time, but will allow ink to be sucked into the pen's mechanism causing rust and corrosion.  A leaky sac will usually be noticed pretty quickly because of the resulting mess, yet can also lead to internal damage. Nonetheless, the work involved in Snorkel sac replacement leads many to keep old sacs that seem "good enough". We always put in fresh sacs, since a sac that might have seemed good enough usually turns out to be anything but once removed from its housing, as shown below. 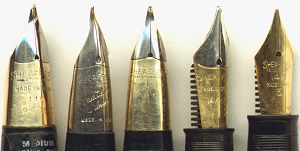 The number of variations and their names can be confusing. The chart below should be of assistance, but don't be surprised if we've made some errors in compiling it! 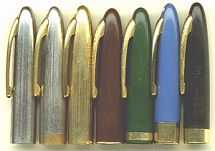 Touchdown and Snorkel desk pens were also made, with a large range of bases.

The short "Tuckaway" pens with their stubby clasp clips were not produced as Snorkels, and indeed are fairly uncommon as Touchdowns (most were made as plunger-fillers). Touchdown Tuckaways were never offered in a slenderized "Thin Model" version -- all are of first-model girth. Tuckaway model designations generally follow the pattern of the chart above.

The PFM (Pen For Men) was introduced in 1959 as an oversized addition to the Snorkel line. It was not a success at the time, although it is quite popular among collectors today.